The Tale of Two Neighbors

The story begins when the cabinetmaker from across the street surprised my wife, Nita, and I with a handcrafted birdhouse, including a plaque that read, “Custom Homes by Jim Grow. Dedicated July 12, 1994.”

Over the decades, our birdhouse was wind torn, ice bound, and sun scorched. The elements proved to be a brutal foe. The cedar roof had lost some of its shakes, the wall slats had loosened and splintered, the canted post below the ground had crumbled. It was a sorrowful sight.

Any dignified man with basic mechanical skills would have rolled up his sleeves and renovated the modest hut. But I’m neither dignified nor mechanical. The apex of my engineering skills is popping the car hood (if lucky enough to find the latch), staring into the abyss, and pretending I know the difference between a carburetor and exhaust manifold—I don’t.

A week ago, my next-door neighbor, Tom Oleson (pictured in this post), came to my rescue. Tom is the Swiss-Army knife of neighbors. He is also a prince of a man. Over the years, he has washed my windows, snow-blown my driveway, and mounted a two-story ladder to change out my houselights because, in his words, he never allows “anyone over seventy to climb higher than a toilet seat.”

When he caught sight of the condition of my birdhouse, he shook his head and mourned. “That ain’t right.”

“I hate to admit it, but I think it’s beyond repair,” I said, hiking my pants in a vain attempt to appear masculine.

Tom was still wobbling his head when he yanked the lopsided four-by-four from the ground and threw it over his shoulder.

Over the next four days, Tom:

The rod stood perfectly plumb. I know the word is “plumb” because Tom corrected me when I said it was “level.”

“Plumb is vertical,” he explained. “Level is horizontal.”

Although he said it politely, I think I detected the slightest arching of an eyebrow. My ego on the line, I was tempted to say, “Your regard seems supercilious,” but my better angel whispered, “It’s smart to know when you’re licked, so shut the hell up.” Which I did.

The following day, Tom and his wife, Leslie, came over with the birdhouse and a basket of fresh corn and peaches.

Tom slipped the four-by-four over the rebar upright. It fit like a piston rod into a barrel. (I looked up the terms so back off.)

After I took his photograph, I said, “Tom, you spent four days on this project. Time is the most valuable commodity we own. Why would you give me so much?”

He didn’t lose a beat. “Don’t you know, Allen? I love you.” Then, with a wink and a smile, he looked over my shoulder at my wife and added, “But I especially love Nita.”

On a pause, I channeled cowboy John Wayne: “That works for me, pilgrim.” 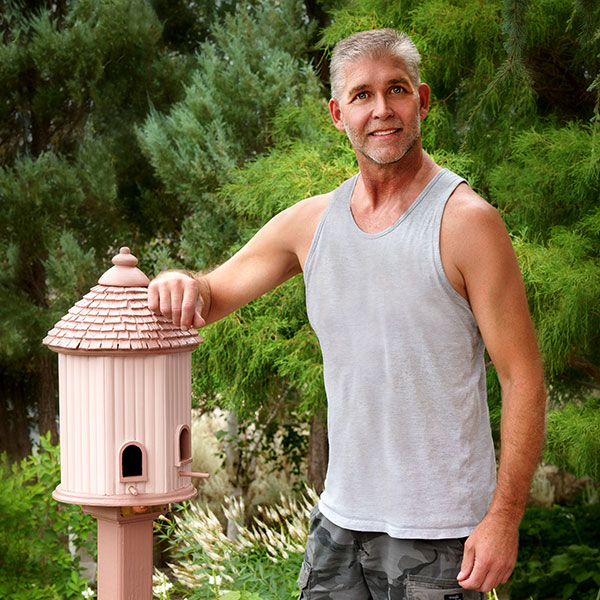