In Remembrance of Mom

If there’s anything I know about death, it’s this: people die the way they lived. If they were miserable in life, full of regrets and grudges, they die badly—riddled with anger and fear. If they were generous, teeming with grace and encouragement, they die well—washed in peace.

My mother was born in 1924. Her name was Helen Marco. When she was seven, she was admitted to the Kallman Home for Orphaned Children in Brooklyn where she met another orphan, Thurston Johnson, who would become her husband and my father.

Mom’s love had no boundaries. It was as though a heavenly tribune had chosen her to be the ecumenical ambassador of love, peace, and joy. No one was excluded from her embrace. If anyone merited being canonized, it was she.

In 2006, my mom was paralyzed below her waist from a cancerous tumor lodged in her lower back. She also sustained a stroke, one that left her with aphasia, a partial inability to understand and speak. The operative word is “partial.” The following year, I chatted with her at her hospice bedside. (For the sake of clarity, I’ve spruced up Mom’s aphasic syntax.)

“Mom, I’d like to talk to you about some serious things.”

“You’re at peace then”

“Oh, yes,” she said.  “Absolutely.  I want peace for Thurston.  I cannot give it to him; only God can do that.  I want my children and my children’s children to have peace.”

I paused before asking the next question. “Would you like to continue living as long as possible?”

“Yes, of course,” she said.  She then spoke about her youngest granddaughter. “Amy is going to have a baby next summer. I want to hold him.” She paused on a smile. “But I’m ready to go to heaven; I’m ready to graduate. My bags are packed for that gospel train.” She released a quiet sigh. “God is God.”

My mother closed her eyes.  Our interview was short, but it seemed to have exhausted her.

When mom entered hospice, her doctor estimated she had one or two months to live. With love to sustain her, she held on for nearly a year and a half. And, she was able to hold Amy’s brand-new son—Mom’s great grandson, Finn—before she passed away. She died on May 16, 2008. She was eighty-four years old.

My last memory of Mom was on the day of her death. She could no longer speak. She could hardly take a breath. I leaned over the rail of her bed, kissed her on the cheek, and whispered in her ear, “I love you, Mom.”

Although she had no words, she looked at me with her shining brown eyes and a touch of peace on her lips. That was all—the sweetest, most luminous smile I’ve ever known.

I will never forget that portrait of absolute serenity. I see it still.

I often think about that last goodbye, that last declaration of love. But I also think about the days I was silent. When I was ten or eleven years old and awakened from a nap, I would stumble from my bedroom, lumber down the hallway, and cross the living room where I would find Mom in her favorite La-Z-Boy recliner, her eyes closed in prayer. I would crawl into her lap and curl up in the warm, safe embrace of her arms. Although I lay in silence, I want to believe—I do believe—she knew every beat of my heart was saying, “I love you, Mom.”

ABOUT THE IMAGE: This 1938 photograph of my mom was taken on the steps of the Kallman Home when she graduated from 8th grade—president of her class. Although it was the end of her formal education, she was a master of social and emotional intelligence.

« PreviousThe Tale of Two Neighbors
Next »A Gift of Love: A Helen Marco Story
Back To Stories 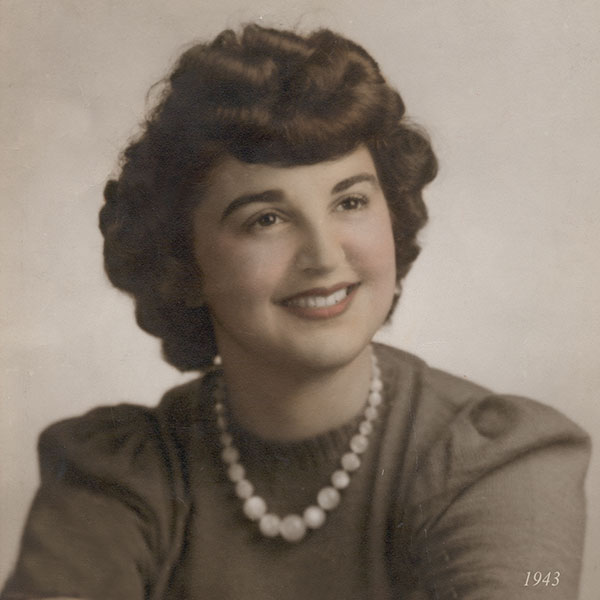