A Gift of Love: A Helen Marco Story

In 1940, Helen Marco, a dark-eyed Greek girl with coarse black hair, slipped in and out of the rooms of the Brooklyn Kallman Home for Orphaned Children. Entirely independent, she moved like a cat who owned the place. She had no distress, other than concern for one of the younger girls who had whooping cough and heartache for a preschool boy who cried out of loneliness.

Helen was only sixteen, but she “owned” the orphanage, feeling she was exactly where she needed to be. When the snow fell, she played with her “brothers” and “sisters”—rollicking in the frigid days as though they were a warm blanket. On the long, sunny days, she would walk down the street on her way to school with her head down in hopes of finding a nickel or a dime, which would be enough for admission to a movie starring Clark Gable or Katharine Hepburn.

“Because it will make a child’s day,” she said without hesitation. Then, putting her arm around me, she added, “Besides, we have so much, don’t we, Son? We’re the lucky ones. We have each other.”

On Saturday night, it was time for everyone’s weekly bath. If she was lucky, she was third or fourth in line before the water turned murky from all the sweat and dust and grass stains from the girls who bathed before her. But, frankly, that didn’t bother her all that much. She loved her sisters—she even told them so when the lights were low, and she was feeling sentimental.

When summer arrived, she—along with nearly one hundred other Kallman Home orphans—would go to a camp near Spring Valley, New York for six sun-drenched weeks. When she was younger, she was a camper; now, at sixteen, she was a camp counselor.

She was in charge of a cabin of nine-year-old boys.  Right at home, she thought of them as gamboling puppies—full of life and wonder and affection. But the boy who made her sigh in tender anguish was Hermie—a handsome, but gangling boy, with round tortoiseshell glasses and a crop of unruly dirty blonde hair.

He was an awkward boy as the first afternoon on the baseball field confirmed. A step slow and a little afraid, he was likely to swing and miss at a pitch that was too high and outside. So, late in the game, when Hermie was at the plate for the third time, his teammates started making fun of him.

“Come on, four eyes, hit the ball for once in your life,” one boy shouted, his hands framing his mouth. But the worst insult was leveled from the spry and wiry shortstop: “Wormy Hermie, taxidermy,” which made no sense, but still made the boys laugh and punch each other on the arm.

As Helen listened to the barrage of jeers, she could see Hermie’s eyes darken and his complexion turn ashen. When the boy had struck out for the third time, he walked back to the bench, his shoulders rolled over his ribcage, his bat tracing a line in the sand behind him. When the boy squatted at the end of the bench away from the rest of the boys, Helen sat down beside him and put her arm around him. “That’s okay, Hermie,” she said. “I’ll teach you how to swing before the week is up.”

At first, Helen thought the boy cringed under her embrace, but when he looked up at her, she saw only admiration. Or was it love?

Helen just smiled and then pursed her lips and whisked her hand across this lawless hair.

That night, after bows and arrows, after washing the dinner dishes, after a campfire marshmallow roast, Helen led her troop of boys to their cabin.

They brushed their teeth and scrubbed the dirt from their faces and  behind their ears. Then they were off to bed.

“It’s been a good day,” Helen announced. Then she recited a bedtime ditty that her house mother had taught her when she was six or seven. “Don’t let the bedbugs bite. If they do hit ‘em with a shoe, that’s what my grandma used to do.” She chuckled, kicked off her tennis shoes, and slipped into her bunk at the door.

There was a rush of whispers and giggles, which made Helen grin with languid satisfaction. She rolled to her side to face the boys and soon was fast asleep.

Across the room, Hermie was still stinging from the snipes on the baseball field. He sure didn’t want to be the camp goat. He wanted to be one of the guys—to laugh with them, roll in the dirt with them, and come out pals.

But Hermie had a problem—a big problem. And what made the mess unbearable was his total helplessness. He’d slam a sledgehammer on the back of his hand if it could make the problem go away. But it couldn’t; nothing could. In the middle of the night, when he was in his deepest sleep, he would dream about swimming, and in that swaddle of water, he would relax everything until the urine drained. And then, the slow release, the sweet surrender would suddenly turn into horrifying panic and shame as he awakened, knowing he had done it again. He had wet the bed, and he could die.

But not this night, not the first night of camp. He had a plan he had hatched when he was still at home. He was sure it would work; it had to work. He reached into his pocket and drew out a thick rubber band and wrapped it once, twice, three times around his penis. Although it felt strange, it really didn’t hurt all that much.

He was on his back now, looking straight up at the slats that ran across the bunk above him. He let out a long, slow draft of breath and finally fell asleep.

The moon waxed and waned.

Hermie was awakened—not by the sun or the cawing ravens—but by his throbbing peter. He picked at the rubber band, but in the night his penis had engorged with blood and urine, and the band was stretched to its limit. He groaned—first softly, hesitantly, and then louder and louder until his agony irrupted into a scream.

Helen threw back her blanket and dashed to the boy’s bedside. “Hermie, what is it?” she asked, her eyes big, searching for understanding. “What’s wrong?”

Hermie reached out, laced his fingers around Helen’s neck, and drew her ear to his mouth. “It’s my weiner,” he whispered.

By now, a half-dozen boys had surrounded Hermie’s bunk.

“Everyone go back to bed,” Helen said with authority. “This doesn’t concern you. Now get.”

The boys scampered back to their bunks.

Helen turned to Hermie and smoothed two fingers over a bulging vein at the boy’s temple. “I need to look, Hermie,” she said as softly as a prayer.

The boy pulled the blanket to one side. His shorts were rolled down below his knees.

Helen’s eyes narrowed. She was not embarrassed. The patch of red that crept across her neck was not out of modesty or shame but pure empathy for the tormented boy.

The rubber band had held its ground, but the flesh on both sides was red and purple and grotesquely swollen. “Don’t worry, Hermie,” Helen said, whispering into his ear. “We’ll take care of this.”

Helen rushed to the first-aid kit that was stowed under her bunk, grabbed something, and bolted back to Hermie’s side. But when she revealed what was in her hand—a gleaming pair of surgical scissors—Hermie howled. “NOOO, DON’T CUT OFF MY WEINER.”

A wave of boyish laughter rolled and crested within the cabin walls.

The boy rounded his mouth and blew a steady stream of air.

Helen carefully, meticulously edged the tip of the small scissors under one loop of the band and snipped the very edge of the elastic, then a little more, until the band finally sprung loose.

“Oh, thank you,” Hermie said as in a gushing tribute to someone who had just slapped down death. He wrapped his arms around Helen’s neck and pressed his face into her chest. “Thank you, thank you,” he said, and then added with conviction, “I love you.”

“You’re welcome, Hermie,” she said, embracing the boy with all the compassion her spirit knew. “I love you, too.”

Helen Marco was an extraordinary teenager. She did not possess the self-doubts of most young people her age. She was honest and true and strangely aware of the emotional condition of others. I should know. Helen Marco was my mother, and from my birth in 1946 to her death in 2008, I inhaled her unconditional love every day from beginning to end.

When she first told me Hermie’s story, her words were soft and tinged with sadness for a boy who struggled to be accepted in life.

I like to think Hermie was influenced, maybe even transformed by my mom’s tenderness, by her gift of love.

I know Mom has greatly influenced me. For example, I’ll never forget my adolescent days when Mom would leave a grocery or department store, walk a few paces down the street, and then splay her fingers and let the change from her purchase jingle-jangle to the ground. 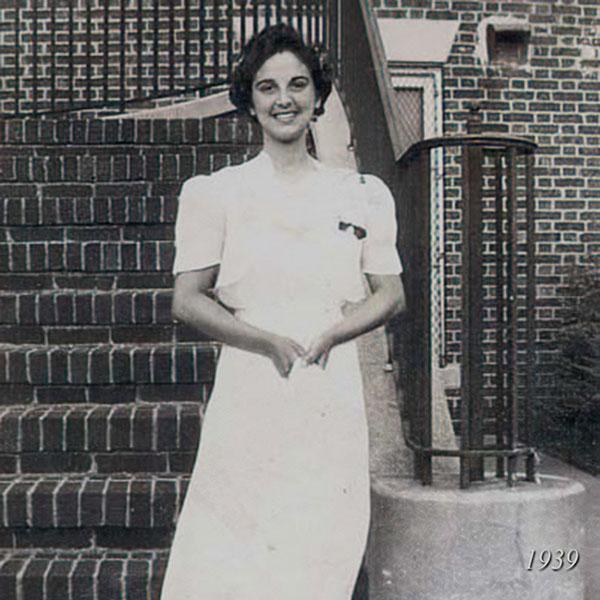