I blame it on my mother—this longing I have for community. My mom was a full-blooded Greek who could make friends with a stranger as swiftly as one Mediterranean wave follows another. I’d like to think I inherited a trace of her calling for fellowship, and for that I am grateful.

Three years ago, I acted on her example by forming a small men’s group. Originally, I thought there must be other men who felt as I and that they would surely invite me into their fold at any moment. So, I waited by the telephone for the call that never came. Finally, I realized that the making of a men’s club was up to me.

My idea was to cast a small circle of guys who were bright, articulate, confident, and willing to be open. I found six men who easily qualified. At first, we called ourselves “A Gathering of Men.” Then, in a moment of shameless hubris, one of the fellas said we should call ourselves “The Magnificent Seven” or “M7” for short. The name had just enough derision to stick.

We meet twice a month over dinner for two to three hours. Our mission is to talk about whatever is important to us at the time. Sometimes the chatter is lightweight bantering about sports, movies, and politics. At other times it becomes a more cautious exploration into the stew of our misgivings: career changes, lost and found loves, the malaise of mortality.

We are usually served by a young waitress we call Danny. She is an affable and hard-working twenty-year old with a winning smile and a delightful sense of humor. We like her style, and I’m sure she enjoys us. That’s why I was a little surprised by her reaction one night after dinner.

“Oh, it’s just a time for some male bonding,” I said smiling, as I always do whenever she calls us “boys.”

Danny laughed out loud. It was not a titter or a chortle; it was a tsunami guffaw—a sardonic tidal-wave of a whoop. Grown men bonding? How perfectly strange—as demented as organizing left and right sock drawers or hosting birthday parties for cats. In Danny’s eyes we were seven weird human beings. Suddenly our self-branding as “The Magnificent Seven” peeled off my face and pooled in my shoes.

I tried to explain myself to my young friend, but I’m not sure I got it right.  So let me try again.

What is male bonding anyway, and why would a bunch of guys want to do it?

I define bonding as intimacy plus commitment.

By intimacy I mean the willingness to be courageously transparent and faithfully empathic. In other words, to speak the truth and listen for the truth.

By commitment I mean a willingness to bring a guest into our family—to celebrate his victories and seek to understand his missteps. There is no scolding or preaching, but there is nurturing and problem-solving. We are there for each other in times of joy and sorrow. The Magnificent Seven have shelled peanuts at baseball games, grilled steaks on an open fire, and lovingly encircled a member at his father’s funeral. We are present—one for the other—to my mind the perfect example of male bonding.

Each member of M7 might say it differently, but I can tell you why I seek them out and why I call them “brothers.”

First, there is something revitalizing about having a circle of friends who can look beyond my shortcomings. Recently one of our members said, “Knowing Allen takes an acquired taste.” And yet my gentle critic still stands by me. Yes, he knows I can be a stickler when it comes to standards of excellence. He acknowledges I don’t suffer fools. And he is well aware I am repelled by my own inconsistencies—that I’ll never be the man my dog thinks I am. Despite all that, he still loves me. I can tell by the way he teases me: not by vicious jabs of one-upmanship, but by a playful reporting of the obvious—that his friend Allen may admire himself a scintilla too much.

Second, male bonding is a release. In the world of business (we are all professionals within the fields of education, psychology, insurance, medicine, and law), we attach our “game faces” with Super Glue. We are expected to perform with supreme confidence and competence. We need to get the right things done the right way and without a lot of coddling, which is just the way we like it. Still, in the workplace coworkers seldom ask how we are doing (unless, of course, they are cataloging our weaknesses).

So, when M7 gets together, it’s a time to open up the valve cap and let the pressure bleed out. At the end of a two-hour dinner, it’s not uncommon for a member to say, “Wow, I really needed that. I feel like I can breathe again.”

Third, the world requires us to be staid and politically correct. We have to be on our toes at all times, careful not to offend the boss, the client, and a wide range of institutions. So, when our happy band of brothers is irreverent, profane, and politically provocative, it’s a good thing. Why?  Because for 120 minutes we can speak the truth, even when the truth is forbidden by policy, doctrine, or social mores. We can say, “The emperor has no clothes” and not be crucified for our back talk.

So, I’m thankful twice over.  First, for my mom who taught me life is sweeter when shared in community.  And, second, for the Magnificent Seven, who have enriched my life with equal measures of acceptance, release, and profanity—all wrapped up in a waft of sweat and bravado. Arrrgh!

And that is why we seven—we mighty, perplexed, and vulnerable few—choose to reunite twice a month to slap each other on the back and ask, “So how ya doin’ anyway?”

« PreviousA Gift of Love: A Helen Marco Story
Next »The Shapeshifting Nature of Love
Back To Stories 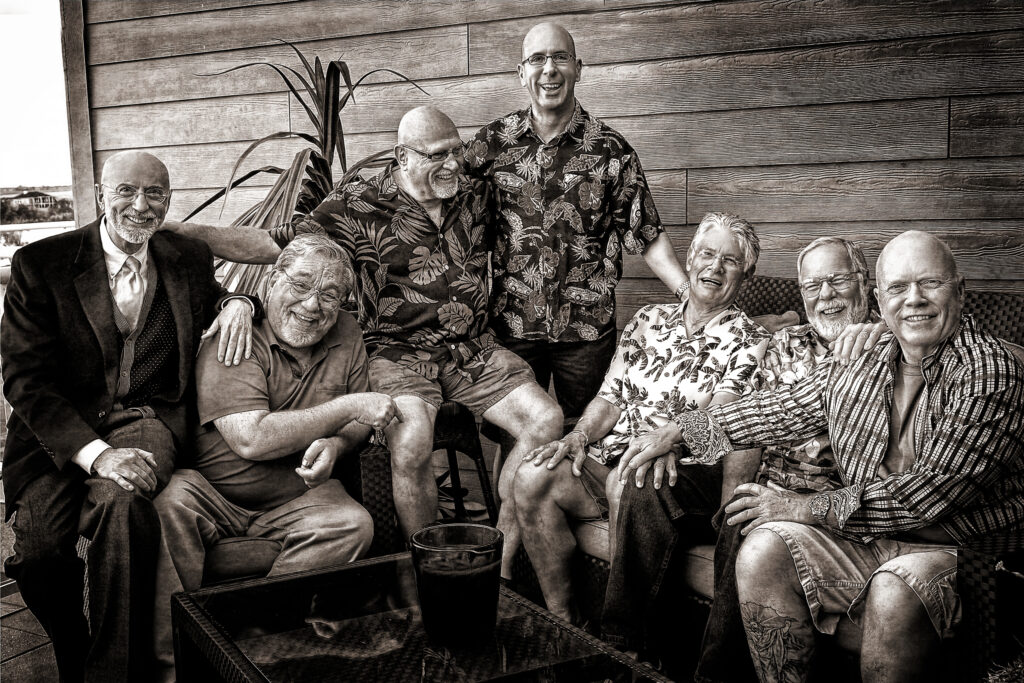