In Search of Self

Like all human beings, I’m the product of every word said, every thought read, every experience bred. This is my story.

It was Thomas Paine—arguably the father of the American Revolution for his publication of Common Sense—who wrote, “The world is my country, all mankind are my brethren, and to do good is my religion.”

That quotation became my mantra when I was in my twenties. As a conscientious objector, I fulfilled my military obligation working for the Mennonites. For the next three years, my wife and I learned French and then taught English in a mountaintop village in northern Algeria.

What I witnessed there changed my life: A boy tied a string to an empty tin can, then purred and rumbled as he dragged the toy across the sand. A high-school teen invited me to his bedroom, opened his closet, and revealed stacks of paperback novels that portrayed the freedom of western culture. The town butcher advertised his latest choice of meat by hanging the animal’s head alongside the shop’s entryway.

The evidence underscored a universal way of being—all seeking happiness, knowledge, and a living wage as best they could. I was overcome by tenderness for those who were less fortunate than I (by American standards) but rich in courage, tradition, and love for their families. I could truly echo Thomas Paine’s declaration: “The world is my country, all mankind are my brethren.”

But actions are more powerful than any belief system. How to behave was the real challenge. Frankly, I was torn. I was raised within a loving evangelical community and hoped to match their faith. I wanted to accept their doctrine as my own. And although I still cherish my Christian family, I decided doctrine separated people where principles brought them together. Although Christ’s words of love, mercy, and grace were as true to me as my own breath, church doctrine had a way of castigating those who thought differently.

Whether one was baptized, sanctified, or canonized—all doctrinaire—mattered little to me. What counted was whether I acted out of goodness. In time, I discovered the influence of a principle-centered life was self-evident: When I was loving, people received me. When I was forgiving, others reciprocated. When I was nonjudgmental, my relationships grew. So, to draw again from Thomas Paine: “To do good is my religion.”  Or, as the fourteenth Dalai Lama, Tenzin Gyatso, said, “My true religion is kindness.”

Apologetically, I realize some will take exception to my stand, perhaps vehemently so. To those I ask two questions: Would life be richer to marinate in anger and condemnation? Or, could harmony roll when others are allowed to believe as they do, even as you sing the praises of your own worldview? For my part, every song has the right to be sung.

THE IMAGE: Truthfully, the 1973 snapshot of me in the Algerian Sahara was chosen as a teaser for my story. (I understand some might frown at my hubris or be unmoved by my less-than-beefcake physique. To the offended, I wish you “happy trails” as you scroll to a more prim and proper post.)

In any case, my wife, Nita, and I were headed south in our battered VW bug—our destination the city of Laghouat on the northern edge of the Sahara. At one point, on a straight road through a sea of sand, we spotted a tiny oasis. My wife, Nita, and I got out of the car to capture my ridiculous portrait. When we had finished, a camel nosed up to us and swished his tongue as if to work up a tide of spittle.  As we stepped back, I surveyed the horizon, wondering if the desert beast had been followed by a band of Bedouins, bracing to stampede over the dunes in the fashion of Lawrence of Arabia. Definitely time to move on.

« PreviousAllen’s Seven Truths: What Are Your Seven Truths?
Next »Death in the Afternoon
Back To Stories 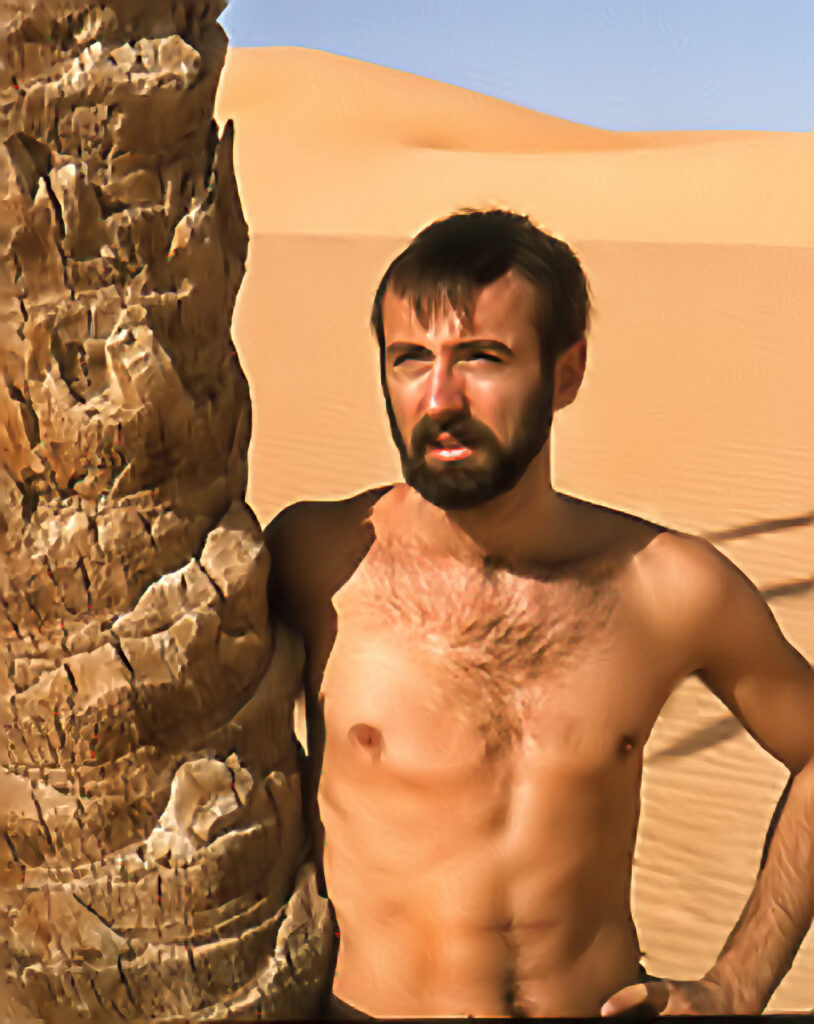