How Today’s Language is Making Me Crazy

I’m old, and it’s all my fault. I ate every day, went to bed at night, and invariably woke up the next morning. The next thing I knew, I was tottering to the bathroom for the third time in the middle of the night to dispense a tablespoon of liquid the color of brake fluid, which makes sense because for decades the damn broth has put the “brakes” on any semblance of a good night’s sleep.

I’m getting carried away before I’ve started. My point is this: I’m old, which may be the reason I’m feeling so cranky. Everything seems to upset me these days: rap music, tongue piercings, and facial tattoos—to name a few. And when did electricians and plumbers start charging $85 an hour for connecting a wire or unclogging a sink? But mostly I’m miffed by today’s vampiric attacks on language.

Okay, I know speech evolves, and there is always a new form of twisted underground chatter among youngsters to give them a sense of identity. For heaven’s sake, when I was a kid, the secret language was pig Latin, which, by the way, is created by transferring the initial consonant or consonant cluster to the end of the word and adding “ay.” In that way, “really stupid” becomes “eally-ray upid-stay.” I could never get the hang of it; it just sounded really upid-stay to me—and more work than it was worth.

I admit we said some pretty dumb things in our day, but it seems to me today’s youth have taken language to a new septic low. And, what’s worse, the new jargon has been taken up by perfectly sane and socially responsible adults—some of them matching my age!

Time for a few examples. Here are four expressions that make me want to go to bed early:

No problem or no prob

This is the young person’s response to requests for courtesy or service. The exchange plays out like this:

“Excuse me, where would I find the bathroom?”

“Straight down the hall and to the right,” says the twenty-something-year-old with a tattoo of her ex-boyfriend’s name on her neck.

“Thank you very much.”

“No problem,” she says over her shoulder as she strides away.

That sends me into a tirade of internal dialogue. No problem? Was there a possibility that my question might be problematic? If I had asked for directions on a bad day, would you have punched me in the bread basket? Are you being magnanimous for taking a moment out of your day to help another human being find his way to the John? Oh, I’m sorry, you don’t know the word “magnanimous”? It means agnanimous-may.

Dis, dissed, dissing (transitive verb, if you were wondering)

As far as I can tell, “dis” is shorthand for “disrespect” or, on occasion, “criticize.” “I’m not dissing you when I say you’re ugly; I’m just tellin’ you the truth.” Or “You have the nerve to dis my driving skills?”

Is there anything wrong with the verbs “disrespect” or “criticize”? I’m sorry, but “dis” is not a word, it’s a prefix. The antonym of “respect” is created by attaching “dis” to the beginning of the root. It’s a nifty tool. Try it, you might like it.

So, what if we only spoke in prefixes? Let’s take another prefix—“un”—which also reverses the meaning of a word. But without the root, understanding the message is impossible. If you said, “He was really un the other day,” does that mean that he was un-happy? Un-forgivable? Un-dressed? There is simply no way of knowing.

But wait a minute. Maybe I’m being too crotchety. Maybe we should speak entirely in prefixes. Just think how much time we would save by saying things like, “I de the para on my tri,” Which could mean, “I deciphered the paradox on my tricycle,” or—less likely, but still possible—“I defrosted the parachute on my tri-CER-a-tops.” You figure it out and get back to me when you have the answer.

Young people are equal-opportunity corruptors of the English language. Their abuse is not limited to verbs. They also take great joy in snipping the sense out of adverbs and adjectives.

It took my friend  Melinda, a street-smart Millennial, to teach me that “totes presh adorbs” means “totally precious and adorable.” It’s a descriptor applied to budding romance, cuddly puppies, or cute babies. I’m glad she explained because my best guess was “Tote bags for preschool doughboys,” which didn’t make any sense to me either.

So, if adjectives can be used to paint a world of sugar and spice, how about adjective splinters to describe the things that are nasty. To that end, I have invented a new expression: “ex vi vish” or—to squeeze it into one word—“exvivish,” meaning “extremely vile and vicious”? Exvivish! Pretty cool, huh? Start using it around the water cooler at work. “Oh, man, the boss was really exvivish this morning.” “Yeah, I’ve never seen him so exvivish.” People will think you’re really like . . . uh . . . with it, dude.

Since I’m focused on clipped words, allow me to end with the acronym “lol.” It took me three years to realize lol did not mean “lots of love,” but, to my horror, “laughing out loud.”

Let me tell you, that was a letdown. Whenever I wrote a few words on Facebook that was slightly humorous, I would often receive a friendly comment or two that ended with lol. “Oh, Allen, you tickle my funny bone. Lol.” “You are a CRAZY man. Lol.”

I was feeling the love. I was thinking, I’m just too darn hot. Everybody loves me. And then I learned the truth of the matter. In reality, all the love was really laughter—nor was it clear if the laughter was a friendly titter or a malicious guffaw.

It felt like the night in Las Vegas when I was strolling down the street past the time when every other reasonable town was asleep. A beautiful woman with high heels and great stems was walking my way. No, she was not “walking”; she was flouncing. When I was close enough to make out the details of her figure—firm and curvaceous—she smiled at me. When I was close enough to make out her ravish-me-red lipstick and thick, extra-long, eyelashes, she lowered her chin, lifted her bare shoulder, and puckered her lips.

I tugged at my belt and thought, Whoa, I am good looking. And then when she had passed, it suddenly hit me like an interstate smashup: She was a lady of the night, and I was her unsuspecting mark. I swallowed a warm wad of delusion while my stomach seized up and gurgled. I was not her prince; I was only a walking, talking dollar sign. I don’t know when I ever felt so devalued, so defiled.

That’s the way I feel about the desecration of language: A beautiful woman morphed into a trollop.

So, there it is: a few gripes about contemporary language. And to tell you the truth, it has made me a little depressed. I think I’ll go to bed early tonight, which is sad. I’ll just wake up before dawn—one day older and a little grumpier—and start my day by mourning the trashing of language in a plugged-in, checked-out, hopped-up world made for people who don’t understand why “rap music” is an oxymoron. Humph.

« PreviousHumor Sells
Next »People Are Not So Strange, Just Calibrated Differently
Back To Stories 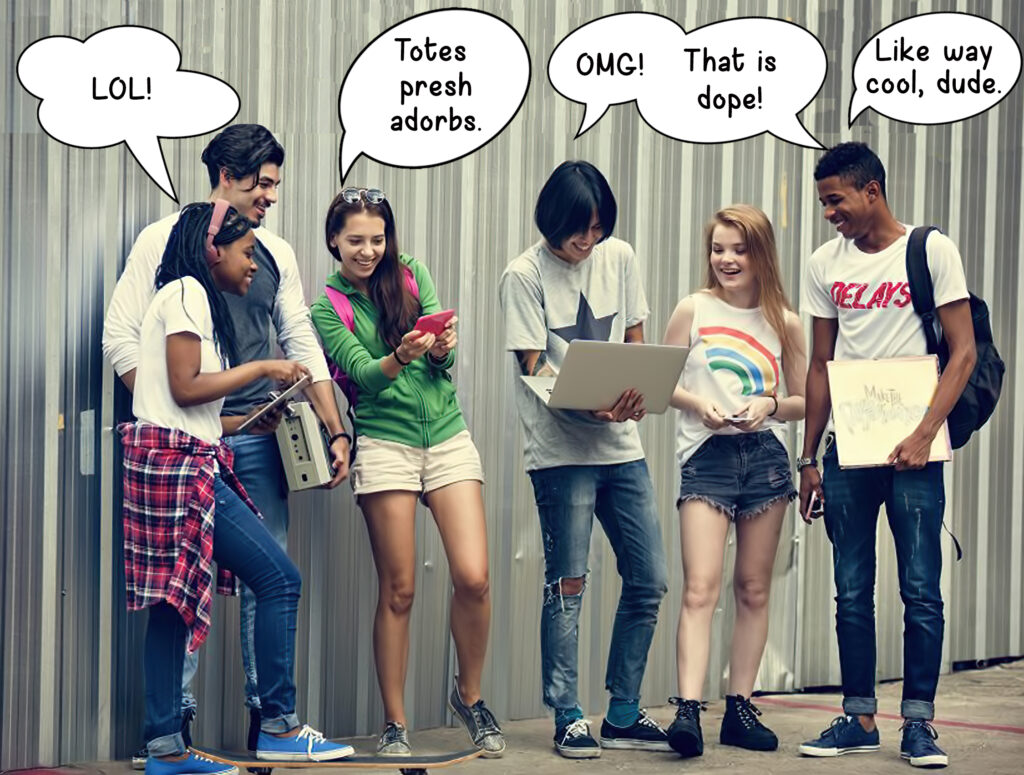