It has been fifty-seven years since I graduated from high school, but my memory of our classmates has never dimmed. I can still see them all at assemblies, ball games, or walking the long hallways from one class to the next.

Ferris Naef is no different. He is still clearly in my mind. He sat first chair in the clarinet section of the school band. I can picture him down and to my right from my perch in the trumpet section. Ferris was always calm—seemingly well grounded, although that was not an expression I would have chosen in 1964. Back then I would have said, “He seems to have it all together.”

His nature had not changed.

One Sunday, I visited Ferris at Kadlec hospital. He was receiving ninety-six-hours of chemotherapy for a fourth-stage cancer that germinated in his throat and had spread to his lymph nodes and possibly his spine.

When I asked if I could report his progress to our classmates, he smiled and said, “Sure, just don’t give them the idea I’m suffering.”

And despite the diagnosis, he didn’t seem to be suffering at all. When I walked into his room, he was surrounded by his wife, Kathy, a daughter, and several grandchildren.

One thing was certain: Ferris did not lack for family. He had eight children and twenty-three grandchildren. And during the ninety minutes I chatted with him, Ferris welcomed even more children, grandchildren, and church friends. And no one left.

After Ferris had described his medical condition, I drew my chair closer to him. We were speaking face-to-face now, almost in whispers, as the other visitors engaged in their own conversations.

“How is your spirit, my friend?” I asked.

Ferris immediately began to tear up. “I am so blessed,” he said, as he reached for a tissue to dab his eyes. And then he told me about another man who, like him, battled throat cancer, and how that man was there for Ferris, and how Ferris was there for him.

My friend’s story made me realize that whatever may happen, Ferris will surely be a servant to his last breath.

I took Ferris’s hand in mind. “Regardless of what happens—if you were to die tomorrow or twenty years from now—are you at peace.”

Again, Ferris offered his infectious smile. “Allen, if tomorrow were the day, I would embrace it. It would be an offense against the Holy Spirit to rebel.”

His statement moved me. I was in the presence of a man who was so much at peace, like a child in his mother’s arms—completely safe from harm.

It was then that Ferris invited me to stay a little longer, while three of his grandsons administered communion to Kathy and him. It was a short ceremony—ten minutes at the most. The young men knelt and offered two scriptures from the Book of Mormon, more as a prayer than as a reading.

Then Ferris asked the boys about the church service he had missed.

“We spoke about the ‘light of countenance,’” one of the boys said.

“And what does that mean?” Ferris asked.

“It means if we are a vessel for Jesus Christ, we must allow his light to be seen through us.”

I considered the face of the young man who had spoken. He had a round, pleasant face with just the whisp of a mustache.

“Tell me,” I asked, “how do you personally achieve that?”

I nodded with understanding and approval.

“It’s an important tenet,” Ferris said. “I’m reminded of C.S. Lewis, an author who is greatly respected within our church.”

Ferris reached for his tablet and smiled with satisfaction as he instantly found the precise paragraph he had in mind—a passage from C.S. Lewis’s celebrated book Mere Christianity. He handed the tablet to me and asked if I would read it. And so I did.

“Imagine yourself as a living house. God comes in to rebuild that house. At first, perhaps, you can understand what He is doing. He is getting the drains right and stopping the leaks in the roof and so on; you knew that those jobs needed doing and so you are not surprised. But presently He starts knocking the house about in a way that hurts abominably and does not seem to make any sense. What on earth is He up to? The explanation is that He is building quite a different house from the one you thought of—throwing out a new wing here, putting on an extra floor there, running up towers, making courtyards. You thought you were being made into a decent little cottage: but He is building a palace. He intends to come and live in it Himself.”

As I read the passage, I found myself fighting back a lump in my throat. Not so much because I was moved by Lewis’s words—although I have always been impressed with Lewis’s clarity of thought and facility with words—but because I was taken aback by Ferris’s love for me.

We were silent for a moment as I let the words tumble in my brain. Then I asked, “So, Ferris, do you see yourself as a temple for God?”

Ferris paused for a moment as he considered my choice of words. “No, more of a messenger. You see, I don’t think it is by coincidence that you are here right now, at this moment of communion. I think you are here because you have so much talent, but that your talent is dim in comparison to what it could be, if you allowed Jesus Christ to shine through it.”

I smiled. “You may be right,” I said. “Wherever the truth lies, there is one thing I know for sure: I am honored to be here in this room at this moment, with so much love swirling around you.”

As I was leaving Ferris’s fellowship, I asked Kathy if I might have a word with her in the hallway.

I shared what Ferris had said to me regarding his peace with the Holy Spirit.

She nodded knowingly. “Of course, we are trusting that Ferris will get through this.”

I gave Kathy a hug, turned, and walked toward the elevators, all the while thinking, Ferris Naef: he is a good man—a very good man. Although he would protest out of humility, I believe he had made his life a palace for his God. Could there be any greater calling?

Ferris died peacefully on July 27, 2016, but his memory lives on in my heart.

« PreviousIn Defense of Freethinkers
Next »Would You Tear Off the Wings of a Monarch Butterfly for a Million Dollars?
Back To Stories 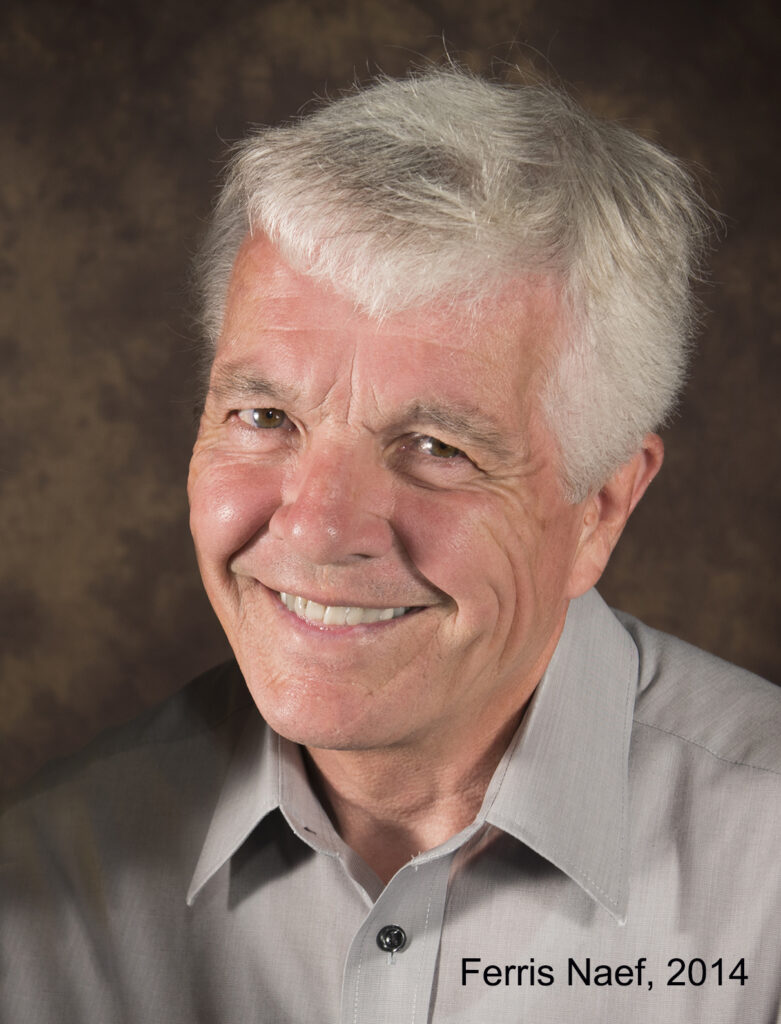