On the Parable of the Good Samaritan

Because I was raised in a Christian environment, I’m very familiar with the parables as taught by Jesus Christ. Clearly, my favorite is “The Good Samaritan.” I think the story is as meaningful today as when it was first told.

As background, there was deep animosity between the Jews and the Samaritans. Some scholars say it goes back to 721 BC when the Assyrians captured Israel and repopulated the land with Samaritans. Two hundred years later, when the Jews returned to Israel, tensions escalated when the Jews found that Samaritans had settled in their homeland.

Interestingly, recent DNA analysis of today’s remaining 700 Samaritans has shown that Samaritans and Jews share a common ancestry. Despite their common animus, you could say they were then, as they are now, brothers and sisters.

First, I’m interested in the lawyer who “tested” Jesus. I speculate he wanted to prove the carpenter’s son had a limited or inaccurate understanding of the law.

Despite his cockiness, the lawyer’s question was critical: “Teacher, what shall I do to inherit eternal life?” I’m interested already, and the story has just begun.

Jesus responded, “You have answered rightly; do this and you will live.” I think Christ was saying “Love is the operation manual for life.” One thing is sure: life is certainly not about indifference or apathy. It’s about love. That’s powerful to me.

Then the lawyer asked, “And who is my neighbor.” Why does the lawyer ask about his neighbor? Maybe he wanted to be reassured that his neighbors were limited to people with a similar heritage: people from his town, his own church—people who were Israelites.

I have a hunch Jesus saw through the lawyer’s shallow understanding and needed a lesson. That’s when the Nazarene recounted the story of the good Samaritan.

In those days, it was common knowledge that the eighteen-mile trek from Jerusalem to Jericho (called “the way of blood”), was dangerous and that Samaritans were known as the ones who would rob and assault the Jews.

In the telling of the story, we learn two Jews (a priest and a Levite) deliberately stepped away from the Jew who had been robbed, beaten, and left for dead.

Isn’t that interesting. The priest and the Levite are the true believers, and, yet, it is a Samaritan, one reviled by the Jews, who had the love, compassion, and kindness to heal the stranger’s wounds, take him to an innkeeper, and open his wallet to aid in the care of a Jew. How unexpected for a Samaritan to be so compassionate. Inconceivable.

And Jesus asked, “Which now of these three, think you, was neighbor to him that fell among the thieves?”

The lawyer responded, “He who showed mercy on him.”

Then Jesus said to him, “Go and do likewise.”

Wow. “Go and do likewise.” Be merciful, be loving, be compassionate—not just to your brethren, but to all humanity. That’s the way to eternal life.

Isn’t that a great reminder for all of us on our “journey from Jerusalem to Jericho”—our passage from chaos to salvation? It is for me. Is it inconceivable that I—like the good Samaritan, an unbeliever—could honor and abide by the principles of mercy, love, and compassion, the qualities Jesus Christ so treasured? For me, it’s not at all inconceivable; in fact, it’s my mission in life—yes, with all the hills and valleys.

In the end, if one of us is a Jew and the other a Samaritan—bound by differences in history, culture, and doctrine—does it really matter? Whether we believe in eternal or temporal life, whether we lean liberal or conservative, we all leave a legacy. The question is whether that legacy will be one of anger and descent or one of grace and mercy. 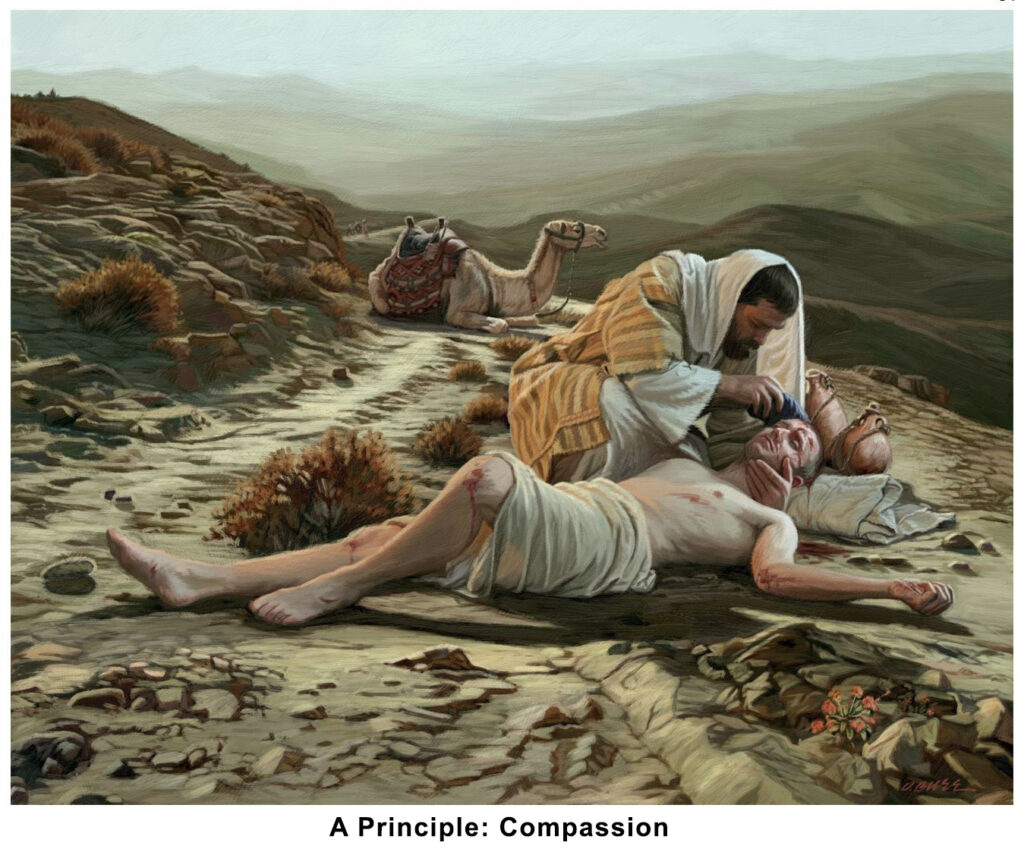