How to Claim Ownership of Your Life

A friend I’ll call Dinah is a woman who rages when she’s cut off in traffic—her madness exploding into vulgar language and gestures. It is not a pretty sight, and she knows it.

Over breakfast, Dinah openly expressed her shame. “I just can’t control it,” she admitted. “A driver shouldn’t cut me off. It’s not right.”

I let her vent for five minutes, which is the limit of my tolerance for whining. “It’s interesting you used the word ‘should,’” I said—“the most judgmental word in the English language. You’re basically saying, ‘He should be like me,’ which, of course, is crazy thinking.”

She crinkled her face. “Why is it crazy?”

“We’re all unique creatures, formed by our heritage, experience, and knowledge. He’s exactly as he should be. To ask him to be like you is asking for the impossible.”

I had a forkful of wholegrain pancake at half-mast when I said, “Sorry, no ‘yeah buts’ allowed. Think of it this way. Reactive people have no space between the stimulus and the response. They instantly surrender their sense of wellbeing to the weaknesses of others—living their lives like a game of billiards, flying off the strikes of a cue ball. It’s a frenzied way of living.”

“You can create space between the stimulus and the response.”

She swiveled her head as if to say, “Okay, get on with it.”

I did. “Within the space between stimulus and response—get this—is the freedom to choose behavior congruent with your principles. That’s the definition of a proactive person.

I continued. “Victor Frankl was an Austrian psychiatrist and holocaust survivor. In his book, Man’s Search for Meaning, he wrote,‘We who lived in concentration camps can remember the men who walked throughout the huts comforting others, giving away their last piece of bread. They offered sufficient proof that everything can be taken away from a man but one thing: the last of the human freedoms—to choose one’s attitude in any given set of circumstances, to choose one’s own way.’ That’s your challenge, Dinah—to choose your own way.”

“You have to program yourself to create more space between the stimulus and the response. Over time, you’ve trained your brain to react automatically. Your cerebrum needs to be rewired. Try this: The next time someone cuts you off in traffic, visualize the most peaceful and sacred place you can imagine—a mountain meadow, a tropical beach—and breathe. It may not make a great difference at first, but if you repeat that routine whenever you’re contested, you’ll eventually reprogram your brain. The gap between stimulus and response will expand, allowing the space to be filled with your highest held principles.”

Dinah’s gaze drifted off, then returned to me. “I can try that.”

ABOUT THE IMAGE: I took this image using a green screen a number of years ago. I was trying to capture what it feels like to live a reactive life, one that is suspended above doom. 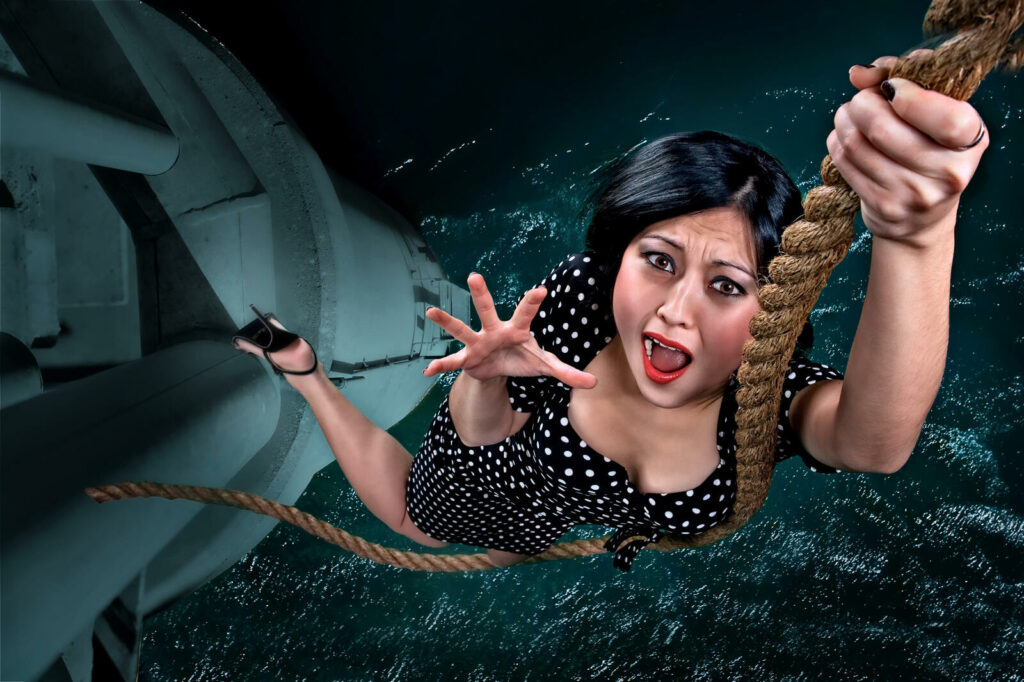