On Taking the Higher Road

Face it, some people are downright nasty—taking pleasure in the handicaps and misfortunes of others. We actually have a word in the English lexicon for the concept: the noun schadenfreude [shaa-duhn-froy-duh], meaning “the enjoyment obtained from the mishaps of others.” As you might suspect, it comes from the German language, created by linking two words: schaden (meaning damage, injury, and harm) plus freude ( meaning happy).

It’s not a particularly uplifting word when you know its meaning and even less pleasant when it’s applied.

But I have a strategy when dealing with schadenfreudes. I take the higher road. Rather than being insulted by a slur, I choose to treat it as if it were a joke—albeit a humorless one. For example, when people poke fun at my conspicuously furless noggin, I often reply with a smile, a swipe over my scalp, and pronounce, “That’s right, I’m just an omelet waiting to happen” or “Yes, but it looks so good when I use Mop and Glo.”

I have a close friend who is five foot six. When someone undermines his stature, he replies with a side-glance, “I may be short, but my brain is still growing.” That’s clever, but there’s a hint of spite in the quip, the subtext being, “Too bad we can’t say the same about you.” I prefer this comeback: “It’s true. I’m always looking upward, which is fine with me; that’s where I get my inspiration.”

But I believe there’s a limit to how forgiving a person should be when it comes to “flaming” schadenfreudes. When the attacks are crushing in abuse, it may be time to move on. Life is too brief and too precious to be wasted on those who are emotionally unfeeling and ethically bereft.

In People of the Lie, the American psychiatrist M. Scott Peck wrote, “When I say that evil has to do with killing, I do not mean to restrict myself to corporeal murder.” I agree. People are endowed with awareness, curiosity, ambition, desires, and expectations. An evil person can destroy those endowments without laying a hand on the victim.

I once proposed a new training program to the executive staff of an international company, a group of fifteen men. At the end of my presentation, the president of the organization said he supported my idea.

Pleased with his endorsement, I turned to him and said, “I think you’re absolutely right.”

The president then glared at me, his eyes without pity, and said, “I don’t give a shit what you think.”

I’m sorry, that’s unacceptable. There’s no humor there, only meanness. Despite his position, I wanted nothing to do with him. I immediately updated my resume, ultimately went into business for myself, and incidentally made three times my old salary.

Some might ask, “Why didn’t you discuss the issue with your boss?” That’s an important question. There’s certainly a time for confrontations. To determine when, I recommend asking four questions: How serious is the conflict? How important is the relationship? Does the offender have the maturity to change? What is the risk to my wellbeing if I stay? Ultimately, I decided though the offense was serious, I was not invested in the relationship, and I gravely questioned the depth of his empathy and, consequently, his ability to change. It was better to leave before my well-being was damaged.

I’m conflicted in what I’m about to say because every case is unique—all with interrelated factors to consider. However, in general, if you have a vicious schadenfreude in your life—one who physically or verbally abuses you or even treats you as if you were invisible—don’t stand for it. If the offender is important to you, let him or her know the behavior is unacceptable and will not be tolerated. If a second offense occurs, leave. The devastation inflicted by a meanspirited person can be lethal—fear and anger gnawing at your soul—and no one merits that.

A mature adult might argue, “Hold on a minute. What if the offender has a damaged spirit? Am I helping him or her by leaving?”

That’s a good question, denoting compassion. However, it’s not the victim’s job to attempt to heal the other while being battered. The offender needs to take responsibility for his or her own psychological and spiritual health. Sticking around can turn one into a codependent enabler, one who rescues the other by encouraging insidious behavior. For the chronic victim, the higher road should be the first road to freedom.

ABOUT THE IMAGE: This photograph was taken from the stage during one of my keynote addresses—one of many national presentations after going into business for myself. On this occasion, I was speaking to the good folks at Youth Villages in Tennessee, whose mission is to heal abused children struggling with emotional and behavioral problems, often caused by parental schadenfreudes. 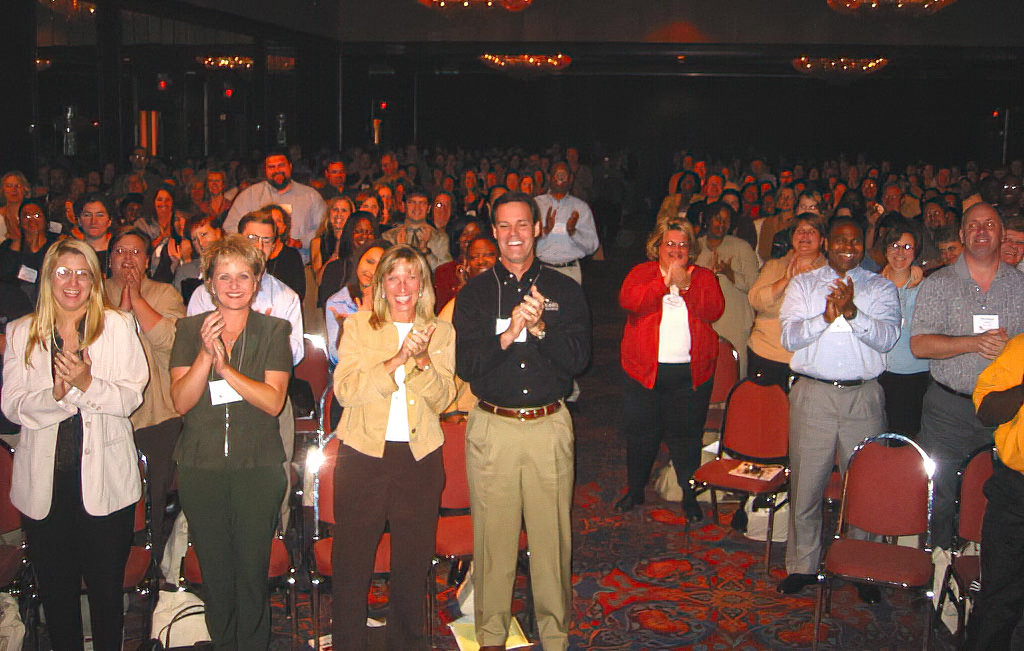