I can’t say I believe in reincarnation. I’m happy with the life I’ve lived. But if I arrive at a  heavenly front desk, and I’m invited to make my next choice in life, I might choose to be—wait for it—an American white pelican.

They seem to have an idyllic existence and not one terribly different from my life as a homo sapiens.

Take their two-fold approach to courting:  (a) circling flights on thermal drafts and (b) strutting dances at a nesting bungalow. Admittedly, I never romanced a mate by twirling in midair, although there was that girl in college who had me spinning out of control—but that’s another story. On the other hand, I have strutted. I can still see myself leaning against my 1968 lime-frosted Mercury Cougar with its optional landau vinyl top. Comparatively speaking, that has to be as sexy as a two-foot-wide nest set in the sand for a pelican mistress.

The big birds are a gregarious lot, often traveling and foraging in large flocks. And, get this, pelicans sometimes form a column on the water, dip their bills, and flap their wings to drive fish toward shore. It’s their way of corralling their prey for dinner. People have used a similar technique with the added benefit of a net since the beginning of recorded time. And I’ve certainly shared a small boat with a friend or two with a fishing pole in hand. That said, unlike pelicans, I have not tasted tadpoles or crayfish or salamanders, but I have eaten snails, oysters, and sushi of unknown ancestry, so being  pelicanized in my next life does not seem like a giant leap.

Mostly, I’m captivated by the bird’s nine-foot wingspan and aeronautical prowess. Pelicans can fly 40 mph at heights of 25,000 feet and water-ski onto a water’s surface by virtue of their webbed feet. In comparison, I can jump one foot off the ground and maybe walk a twenty-minute mile (recalculations required after the first lap).

So, yes, the possibility of being a strutting, sushi-eating, soaring flyboy does appeal to me, which may account for my love for photographing the bucket-beaked wonders.

ABOUT THE IMAGE: The image was  taken on the Yakima Delta Habitat near Richland, Washington. The photograph that looks like five birds in flight was actually a timelapse image of a single pelican who was peeved by my proximity. I called him “Sam.” I like to think he and I could become fast feathered friends in my next life, soaring over Mount Rainier and back again to the Yakima Delta. On the other hand, I could return as a frog, be scooped up by Sam, and swallow in a single slurp. Now that’s just rude. 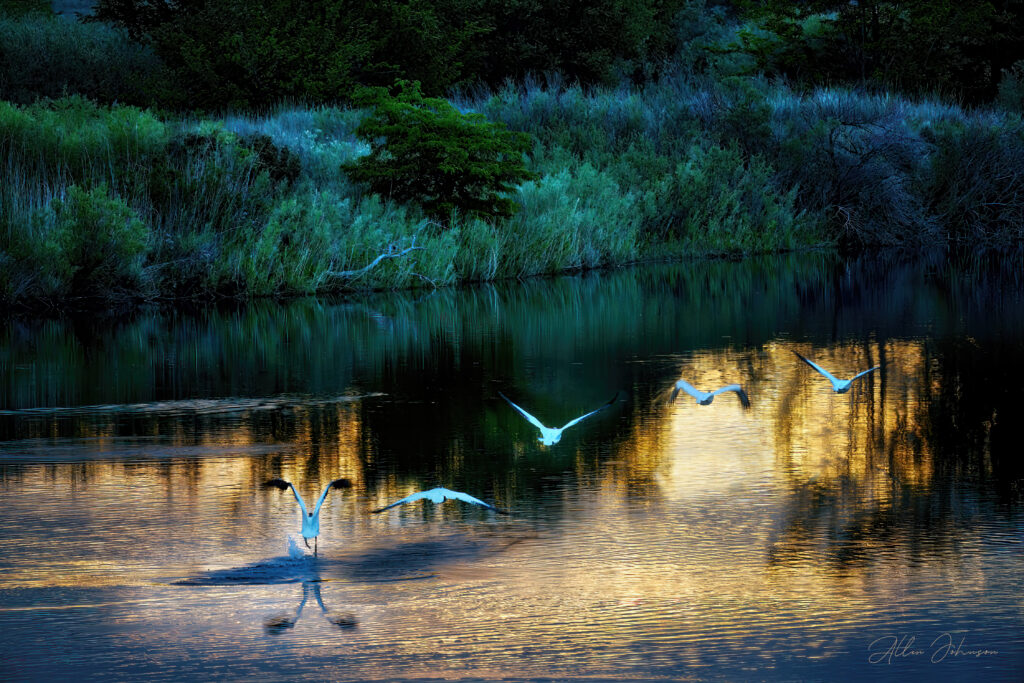